Recently, I received a call from Tina (name changed) who was struggling with her childhood memories of sexual abuse. She was wondering whether therapy can help her. After having an initial conversation over the phone, we planned for a session.

For details about the techniques mentioned in the case study on sexual abuse therapy, check the references at the end of the case study

Tina had already shared her challenge so I asked her to describe the problem a little.

Tina : So Nitin, this started when I was a teenager. I was sexually abused by my neighbor. At that time, my mother had been hospitalised for a month and I, being the eldest daughter, had to take over the household responsibilities. While I always had some recollections of the abuse, it was not until recently that I felt it was having a big impact on my  life.

This started affecting my relationship of ten months. Nitin, I haven’t yet told Amit (her partner) about the abuse. I have poor self-esteem and even feel disgusted with myself.

As always, in this first consultation session, after listening to Tina’s overview of the problem, I began by psycho-educating her about the process and the possible implications of counseling. I suggested Cognitive Hypnotic Psychotherapy (which is an eclectic approach to therapy) for working through the abuse. Then I walked her through the therapy process.

I helped her understand that during the sessions, once we have defined the current problem and outcome clearly, I will help her –

After hearing this, Tina felt relieved and this showed on her face. She booked an appointment for the next session almost immediately after we finished our initial consultation.

I started the first therapy session by asking Tina  to summarize the challenges she wanted to overcome through therapy in her own words.

Tina: I am constantly thinking about the abuse that happened during my teenage years and that these memories are stopping me from getting closer to Amit (her partner).

I asked Tina to reframe her problem statement using the following format:

Tina: I feel vulnerable and insecure about myself and my relationship when the memories of abuse come in my mind.

I asked Tina to read the statement a few times and tell me what outcome she wanted to achieve at the end of these sessions, in the following format.

Tina: I wish to be free from the clutches of my past memories and feel safe and confident about myself and my relationship.

I asked Tina to describe a day in the future after she had achieved her outcome.

She described the day in the future describing the smallest of things that she would do differently in the future, once the outcome is achieved. She spoke about how her relationship with her partner would be different and how she would enjoy that a lot more.

I further asked questions to ensure that her answers were both detailed and sensory based.

She was asked to complete writing the future as homework.

We began session two of sexual abuse coaching next week by asking her about the week and any changes that she noticed in her behaviours, thoughts or emotions. Tina mentioned that while she was writing the future, she actually started believing that it was possible to achieve that, which seemed almost impossible before the sessions.

After the initial discussions, we focused on identifying the specific behaviours that she wanted to change and the tasks that she needed to complete in order to achieve her outcome.

After this, I used the When-Then Thought restructuring*1 process to help her come up with new thoughts that would enable her to change her thoughts naturally. I also used the Anchoring*2 process to create associations between tasks and desired emotions where Tina had earlier identified potential emotions that may stop her from doing that task.

Her homework for the week was to practice the When-Then statements and check how she was responding in the situations for which the anchors had been created.

The session began with a review of the past week. Tina reported that she had already started noticing various changes in her behaviour and daily routine.

After that, I helped her create a positive, present, possible, precise, and personal Summary Suggestion*3 for the complete SOFTSEA. Tina came up with this statement, “I am learning to be confident about myself.”

Once the Summary statement was created, I helped Tina experience a hypnotic state with the help of a combination of induction and deepening techniques which was customized based on her responses and experience. The hypnotic state was then used to help her –

A recording of the sexual abuse counselling session was given to her to practice every day. She was asked to identify three behaviours that she felt would begin to change as a result of the process. The three changes that she identified were –

In the next session, she reported that her mood swings had reduced by at least 50%. she felt observably more hopeful about her life. Her sleep improved but she still had a couple of nights where she woke up in the middle of the night, feeling a bit anxious.

I then used a combination of Hypnodrama*5 (a modified version of the empty chair technique), Ho’oponopono*5 and Cord-Cutting*5 to help her release the suppressed emotions that were stored in her mind, as a result of the abuse.

She was asked about her experience and what she expected to notice in the coming days, in her life. She mentioned that she was surprised at the intensity of anger, guilt and helplessness that she had been carrying and that she felt much lighter and safer at the end of the process. She said that she expected her sleep to become completely normal and restful. During the week, she had to attend a function and she hoped that she would be able to interact with men. She mentioned that before this session, she would have felt anxious and unsafe with the idea of talking to a relatively strange male. And she said that now she would be able to focus better on her work.

We began by reviewing the past week. Tina reported that her sleep has become completely restful. Unlike before, there wasn’t even a single episode where she woke up in the middle of the night. During the week, she was able to focus on her work and was more productive. And she was surprised that she was able to speak to a couple of men who were her friends’ friends and she felt comfortable talking to them. Though she hadn’t expected but her mood swings had also reduced comparatively. She reported that there were still episodes of mood swings.

Then, I used a combination of delayering through SVIT™*6, Regression*7 and Inner Child*5 to help her identify and resolve the root cause of intense mood swings.

After this session of sexual abuse counselling, the client expected that her situation would be far better and that the problem she was working with is more or less resolved.

The client stayed in touch with me over the next few weeks, providing updates on how things were going. She had experienced a remarkable change, both in terms of how confident she felt about herself and her ability to deal with situations and people around her. She also reported that there was this strong sense of security and hope that she experienced.

After about two months, the client reported a mini relapse that happened as a result of her watching a movie where the lead actor was subject to abuse. She mentioned that in her daily life, things were far better than where she bagan, but she had just not been able to entertain the thought of going for another movie after that. The client was asked to come back for a session.

In this session, the Rewind Technique*8 (a modified version of the Fast Phobia Cure) in combination with Anchoring, was used to help her address this new challenge. After this session, the client was hopeful that she would not require another session. She stayed in touch with me for a couple of months, providing updates about her condition. Since she no longer experienced any of the earlier symptoms and felt safe, secure, hopeful and excited about her life, it was decided that we could close the sessions.

“A few months ago, if someone told me that I could overcome the feeling of insecurity and vulnerability, I would have dismissed the idea immediately. But the systematic therapy sessions that I took with Nitin have not only helped me overcome those emotions but also given me a new outlook towards life.

I now look forward to meeting new people, making friends, and feel secure at work and in my relationship. Not only am I free from the past, my entire life has taken a 180-degree turn. I have become more optimistic and productive. I look forward to each new day as it comes. Thank you, Nitin Shah and ICHARS for making this possible!”

Notice how powerful the Eclectic approach to therapy can be and also that therapy cannot just help clients achieve their outcomes but also create additional positive effects that may not have been a part of the discussed outcomes of therapy.

Introduction In this post we will explore one of the most important and controversial NLP concept, the Lead and Representation systems. I would like you to consider a few questions

“Acceptance” is one of those concepts that I understand yet have found difficult to define. I realised this while writing a post on anger, in which I explained how anger 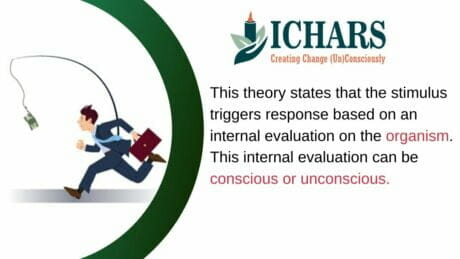 Introduction In this post, we will focus on one of the most important concepts from behavioural psychology, namely: the S-O-R Theory. S stands for Stimulus, O for Organism and R