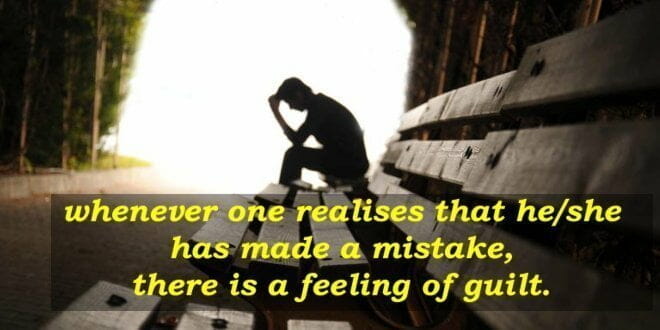 Guilt is a cognitive or an emotional experience that occurs when a person realizes or believes — accurately or not — that he or she has compromised his or her own standards of conduct or has violated a moral standard, and bears significant responsibility for that violation.

Simply put, whenever one realises that he/she has made a mistake, there is a feeling of guilt.

Let us understand this with the help of an example:

A father and son (small child) are going for a function together. On their way, the son sees a toy shop. Inside the toy shop through the window, he can see a toy car. He shows this car to his father and asks the father to buy it for him.

Father refuses to buy this car which leads to the son crying. There are other people around who start looking at the son’s crying which makes the father feel very embarrassed. This embarrassment leads to anger and the father ends by slapping his son.

This event is observed by a friend of the father. This friend tells the father, in a way in which the father understands, that he should not slap his son as this could have a lasting negative effect on the son.

This realisation that he made a mistake by slapping his son makes the father feel guilty.

This brings us to a very important question.

Is there a purpose that guilt serves?

To understand this, let us take the same example forward:

After some days, this event repeats where the father feels embarrassed due to his son’s behaviour. This embarrassment again makes the father angry. At the same time, the guilt from previous experience, at least initially, prevents the father from slapping the child again.

In other words, in my limited understanding, the purpose of guilt is to prevent a person from making the same mistake again.

If this is the purpose of guilt, why is guilt considered negative?

Continuing with the same example:

So the father is feeling angry due to son’s actions and guilt from the previous experience is stopping the father from slapping the son again.

Now the problem is that the father does not know another way of dealing with the situation.

After sometime since the son continues crying the father continues feeling more and more angry till anger gets the better of him and he slaps the son again, this time since the intensity of anger is greater the slap is even tighter.

In short, the guilt whose purpose was to prevent the father from making the same mistake again is not able to fulfil its purpose because the father did not know an alternative way of dealing with the same situation.

Thus, the problem doesn’t lie with guilt but with our inability to learn from our mistakes.

So what is the way to work with guilt?

It’s only when we don’t learn from our mistakes that guilt becomes a problem.

This brings us to the original question “IS GUILT REALLY NEGATIVE” or is it our inability to learn from our mistakes that is the problem?

Note: At times, when the guilt is very intense, one needs to forgive self along with learning an alternative way to deal with the same situation.

If you or someone you know has been struggling with guilt or other emotions, feel free to book a session with one of our specialist by calling us on +91-8080-2084-73.

If you are a psychologist who would like to develop advanced therapeutic skills based on an eclectic approach to therapy and help clients resolve different emotional , you must search for the Cognitive Hypnotic Psychotherapy® Program.

What is Confidentiality in Therapy? – With Exceptions

Before you read any further, we must emphasize that client confidentiality in therapy is an integral part of a therapist’s code of ethics. Every therapist must maintain privacy of the

Introduction What truly is logic? Who decides reason? Ground shattering questions powerfully put forth by John Forbes Nash Jr. in the film, A Beautiful Mind—a biographical film about the noble